February might very well be the very best month to visit Panama.  Why, you may ask?  1 word:  Carnival.  When most people think of Mardi Gras, they imagine Fat Tuesday in New Orleans or the biggest parade in the world, Carnaval Rio de Janeiro.  Fair enough.  However, since the early 1900s, the Carnival in Panama has grown into another one of the largest celebrations in the world.  Panama Carnival is certainly an event that you must experience first-hand to fully understand.

Where can you see the most creative floats and outlandish costumes during Panama Carnival?  Panama City is always a great choice, but we are inclined to first recommend the town of Las Tablas, which is about a 3 hour drive from the country´s capital.  Our old friend Captain Morgan is rumored to be responsible for this town´s namesake.  The boards (las tablas) used to construct the first homes in town are said to have come from a ship that ran aground fleeing from said pirate´s arrival in Panama City.  Let´s all raise a shot of rum to this infamous privateer!  Las Tablas is the capital city of the province of Los Santos, and is located on the Azuero Peninsula in the Gulf of Panama. 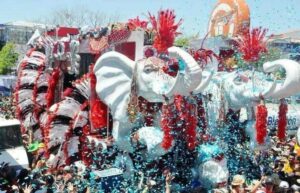 There is nothing like an inner-city rivalry to force one to step up their game, and Las Tablas is split right down the middle with Calle Arriba (Street Above) and Calle Abajo (Street Below) duking it out for Carnival bragging rights.  Each faction has their own queen, parade, fireworks, music, decorated plaza, concerts, and much more with the sole purpose of out-doing the other street.  This makes you the real winner, with incredible parties that may keep you out until the wee hours of the morning.  Wear clothes that you won´t mind getting wet, as large trucks join the parade spraying refreshingly clean water on the crowd.  When experiencing Carnival in Panana; dance, drink, and be merry!  The only way you will stand out from the locals is by not making a fool of yourself.

Should you find yourself in the capital Panama City in February on the Saturday before Ash Wednesday, you are also in for a treat.  The recently built ¨Cinta Costera¨ beltway and parks that run along the coastline now host huge Carnival Celebrations that culminate with the crowning of the festival queen.  Live music can be heard all around, with locals dancing and mingling into the early dawn.  Once again, be prepared to get wet as large trucks with water hoses, water balloons, and buckets could potentially come your way.  Leave any pricey watches or cell phones that are not water-proof at the hotel!  On Sunday you can watch the first of many Carnival parades taking place over the next few days.  The beautiful ¨pollera¨ parade starts at noon and showcases the national costume with thousands of women and girls wearing their traditional dress proudly.  Monday afternoon will also be filled with parades, and everything climaxes on Shrove Tuesday.  The Cinta Costera highway will be jam packed with extravagant floats and over-the-top costumes from all walks of society.  Enjoy Panama’s Carnival celebrations well into Wednesday morning. 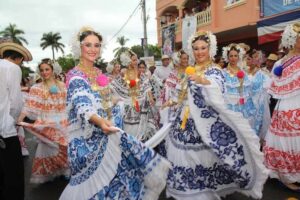 This year the Panama Carnival will take place through February 14-17.  Can´t make it in time?  Be sure to book Panama Carnival 2016 in advance for a memorable vacation highlighting the very best of Panamanian culture!

Costa Rica – Panama Borders: What You Need To Know Before You Go

Traveling Cross Country in Costa Rica During a Global Pandemic