Costa Rica knows which side its bread is buttered on. People don’t visit for the culture, cuisine or nightlife; they come for the nature. The country has secured its future appeal as a bio-diverse region by designating nearly one-third of its land as national parks and reserves. Ecotourists can roam terrain that includes an active volcano surrounded by rainforest, pristine Pacific and Caribbean beaches, magnificent cloud forests, verdant jungle and rushing rivers. These natural areas teem with wildlife. Popular activities include guided birdwatching and rainforest hikes, whale watching in season and volunteering to protect endangered sea turtles. An unforgettable experience is traversing one of the treetop canopy walkways high above the rainforest floor. During my visit to Monteverde Cloud Forest Biological Reserve, I remember hearing the howler monkeys long before I saw them. They came closer and closer, until they were hanging in the trees only a few feet away, offering an up-close-and-personal encounter.

Nature-lovers will also find an assortment of eco-lodges that put them right in the midst of nature; responsible visitors will want to seek out an eco-lodge that has received a Certification for Sustainable Tourism from the Costa Rican Tourism Board.

With 20 natural parks and eight biological reserves, Costa Rica’s protected areas are rich in eco-tourism pursuits, but the five featured below should be high on anyone’s list. 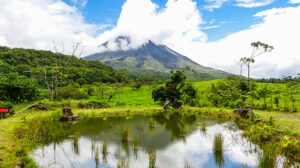 A visit here provides a fair amount of drama, since the park contains an active 5,357-foot volcano, responsible for 87 deaths in 1968. Depending on the thickness of the cloud cover, it’s possible to see smoke billowing from the volcano by day and the glow of bright red lava at night. But there’s more to Arenal than the volcano. There are numerous trails through the park that afford plenty of opportunities to observe wildlife. A highlight of my hike was coming across a herd of wild pigs rushing through the underbrush. The park is also home to tapir, deer and white-faced monkeys and a multitude of birds, including parrots. Arenal’s dry season runs from February to April, while the rain pours down from May to January. During those months it’s smart to keep an ultrathin poncho in your pocket. For the ultimate thrill, book a room in the Arenal Observatory Lodge, where you’ll be able to see the lava flow at night. Although the experience isn’t for everyone; my nine-year old son didn’t sleep a wink that night, his mind filled with visions of an erupting Armageddon. 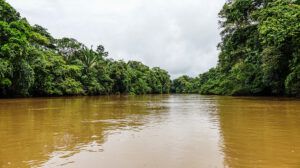 Visiting here takes commitment since it lies far to the north near the Nicaraguan border. One thing travelers will quickly learn is not to judge distances by appearances on a map. In Costa Rica, it’s all about the roads. I’ve had what looked to be a 30-minute drive on the map turn out to be in reality a six-hour journey. The typical Caño Negro eco-tour sets out by boat from the town of Los Chiles for an excursion up the Río Frío to Lago Caño Negro, a watery terrain reminiscent of the Everglades. The Caño Negro Wildlife Refuge consists of tropical rainforest and marshland and can sometimes be a wet proposition when the rivers overflow from July to November. The dry season attracts the most birds, when they come to the reserve to make their nests. Dedicated birders will want to set their sights on the endangered Jabirus, the largest bird in Central America. Visitors should also keep an eye out for spider monkeys, freshwater bull sharks, ocelots, three-toed sloths, caimans, and the provocatively-named Jesus Christ Lizard (they run on water). 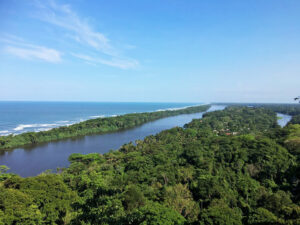 One of Costa Rica’s premiere eco-tourism activities is pitching in to help the endangered sea turtle. The country’s beaches are nesting grounds for four species of sea turtles: the hawksbill, loggerhead, Pacific green and the giant leatherback. Nature-lovers can observe the hatchlings and nesting turtles and take things a step further by joining one of the programs that allows them to actually assist in moving eggs to safe nesting areas, patrolling the beaches at night and collecting data on the turtles. The center of this activity is the 47,000-acre coastal preserve Tortuguero National Park, which contains a network of waterways only navigable by boat. In addition to turtles, the Caribbean coast park is home to a variety of wildlife, including otters, crocodiles and manatees. Those interested in going the extra mile for the endangered turtles can contact the Caribbean Conservation Corporation for information about volunteer programs. There are a number of eco-lodges in the park that can offer comfortable accommodations and make arrangements for guided tours of Tortuguero National Park. 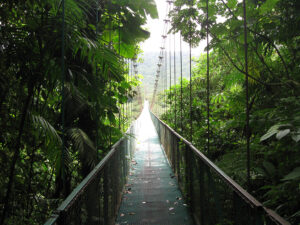 The whole concept of a cloud forest is magical in nature. Monteverde Cloud Forest Biological Reserve is 5,000 feet above sea level and is a prime spot for birders, who come to seek out a glimpse of over 400 species of birds. Another draw for visitors is the reserve’s 300 species of orchids. The mist-enshrouded forest can be explored via a network of trails. Visitation is limited to only 120 persons at a time, which in addition to preserving the biodiversity of the reserve, makes an excursion even more serene and secluded. There’s a selection of eco-lodges at the edge of the reserve that can provide everything from high-style accommodations to bare-bones lodgings. The lodges can also help book the services of a trained guide, which is recommended for extracting the ultimate from a forest excursion. 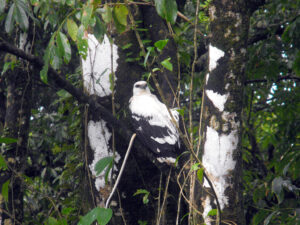 Nature isn’t usually described as “intense.” An exception is The National Geographic Society referring to Costa Rica’s Peninsula Osa as “the most biologically intense place on the planet.” This is where eco-tourists will find Corcovado National Park, which comprises 127,000 acres of rainforest that is home to 400 bird species and an outstanding 100 reptile and amphibian species, including the mystifying-looking glass frog, whose transparent belly skin allows for a queasy look at its organs. Other creatures within the park include scarlet macaws, jaguars, squirrel monkeys and poison arrow frogs. Getting to Corcovado takes some doing, since there are no roads leading up to the park’s edge and dedicated nature lovers have to hike in. A convenient way to tour the park is to secure lodgings in the nearby town of Puerto Jiménez. For the ultimate immersive experience, make arrangements to camp in one of the Corcovado’s four camp areas.