The region of Arenal, home to the Arenal Volcano National Park and Lake Arenal, is one of the most visited destinations in Costa Rica.   Actually, about 80% of Costa Rica’s visitors come to the Arenal Volcano region, that is a phenomenal number!  Its popularity is not only due to the region’s inherent beauty, but to the long, long, LONG list of activities in Arenal.  You could say Arenal is the adventure capital of Costa Rica.  From hiking expeditions, to water activities, to wildlife tours, to hot springs spas, the fun is endless in the Arenal Volcano region.  There is something for all tastes and ages whether you are traveling with friends, family or on your own. Over 30 different activities can be found right here!!!

An interesting fact about Volcan Arenal is that not long ago, actually until 1968, the Arenal Volcano was actually known as Arenal Peak (Cerro Arenal)!!  A sudden explosion created the crater that has remained active ever since, making it one of the 10 most active volcanoes IN THE WORLD!  So you might understand why Volcano tours are very trendy nowadays among nature lovers and adventure seekers visiting Costa Rica.

The Arenal region has one of greatest concentration of tours and activities in Costa Rica, yet there are a few that definitely stand out and are considered a MUST DO if in the area: canopy, canyoning, river rafting, taking the aerial tram and paying a visit to the fabulous natural hot springs around the Arenal Volcano base. Arenal also features two of the most challenging and most interesting, even exotic, hiking trails!  A hike to an extinct volcano, the Cerro Chato or “Flat Hill”, and its green lagoon, or the Rio Celeste (Celeste River) Hike, a river whose water is truly SKY-BLUE!! Therefore if you consider yourself a consummated hiker, pack your bags and come to Arenal for some of the best hiking in Costa Rica! 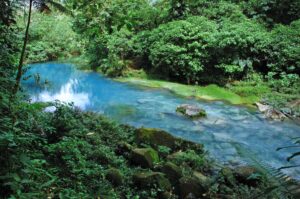 Lake Arenal is a jewel in its own. It is actually Costa Rica’s largest lake (33 square miles) and it was artificially made!   A dam was built to generate the country’s electric power and today produces about 70% of Costa Rica’s electricity.  The lake is PERFECT for water sports.  Its strong winds at the north end of the lake offer some of THE BEST kite surfing and windsurfing in Costa Rica when in season.   On the southern area (closer to the town of La Fortuna), fishing for bass is a top activity and Rainbow Bass is a great catch.  Boat excursions are also great family activities and you can find boat trips across the lake to the famous cloud forests of Monteverde, a rustic yet more beautiful alternative to travel between Arenal and Monteverde if you got the extra time. 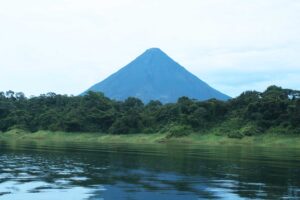 Lodging offered in Arenal is ABUNDANT! Of course, if you’re planning on coming to Costa Rica during Peak Season (Dec-Jan) you definitely want to book your hotel at least 2-3 months in advance; yet, in Arenal you can find from $8 USD beds in shared rooms to some of the most luxurious, 5-star hotels in the country that can cost thousands of dollars a night!  Arenal has over 100 places for you to stay.

Due to its location, Arenal is an excellent stop over on your way to different destinations in the country, and an even better option for our Smart Connection Deals! Why spend your vacation time on the road when you can “tour” your way from one destination to the next?!  Smart connection tours can take you from Arenal to San Jose or Puerto Viejo.  Shuttles connect Arenal to the north of Costa Rica as well as with the stunning North Pacific beaches; it is only 1.5 hours away from the Daniel Oduber Airport in Liberia (Costa Rica’s second international airport) and in between Rincon de La Vieja, Monteverde and San Jose or Sarapiqui.

Arenal is considerably HUMID and very hot; it is commonly referred to as the beach with a lake instead of an ocean!! It also rains quite a bit in Arenal, so bringing along a jacket and an umbrella is highly recommended.

The Arenal Volcano region is a HOT destination in Costa Rica. Unparalleled beauty, TONS of activities and an excellent location among other top attractions in the country makes the Arenal region a MUST! 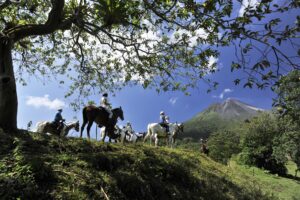