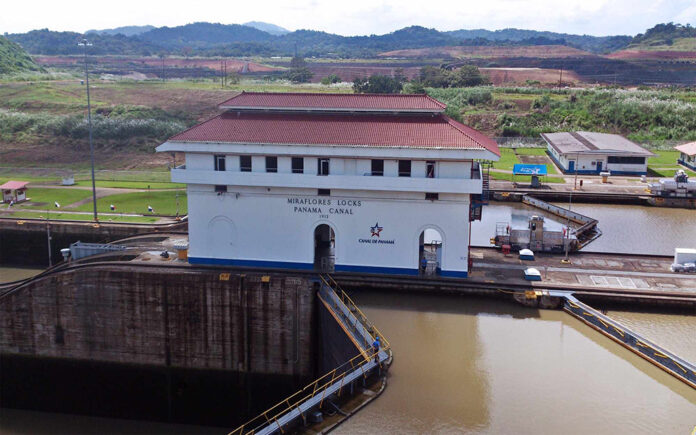 One of the most important things to do in Panama City has got to be paying a visit to the Panama Canal.  The Miraflores Locks museum offers probably the most informative and complete glimpse into this massive man-made marvel.  In the span of 1-2 hours, you can take away a whole new appreciation for the Locks themselves, the labor to build it, the politics behind it, and its overall affect it has had on the expansion of the entire world….not just the Zonian region.  That is what makes the Miraflores Locks at the Panama Canal a must do on your vacation in Panama.

There are 2 entrance fees. One just allows you to the outside viewing platform where you can see the locks in action.  I however recommend the all-access pass that includes all the museum exhibits, the movie theater, and the really cool simulator.  Once you climb the steep steps to the entrance, you pay at the ticket booth, and then enter the building after a quick security check.  There is a gift shop where you can purchase souvenirs and water inside, but I recommend bringing your own or you will pay a ridiculous amount for a tiny bottle of water. 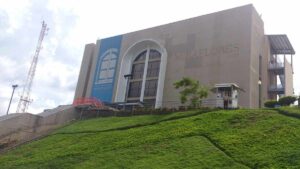 Inside the Miraflores Locks Museum there are guides for hire if you wish, however in my opinion if you can read English or Spanish, there is plenty of information in writing and you can go at your own pace and not worry about moving around in a group.  I noticed massive groups kind of struggling to all fit together in small spaces in order to hear the guides explanation….which was basically being read off the wall.  So really I prefer to go it solo and did not feel like I was missing out on anything.  Besides, just like any museum tour anywhere else, you can always pause out behind a group and suck up the extra info for free anyhow…..wait, should I say that out loud?

The first of the four exhibits is The History Hall.  As you may have guessed, it is dedicated to the background history of the Panama Canal.  This to me was the most fascinating floor and also heartbreaking.  I honestly did not realize the amount of lives that were lost in the building of the Panama Canal.  Also the technological and engineering advances that were made to make the construction possible… simply amazing when put into the context that this was over 100 years ago.

The second floor exhibit is The Hall of Water: Source of Life.  This was an unexpected treat as I am a lover of insects and there is a fantastic exhibit of several critters you could find in the rainforest surrounding the Canal Zone.  This is also the watershed for the entire region in addition to being the most important ingredient to the function of the locks…..enough water to support the locks system.  This exhibit highlights on the things Panama is doing to ensure that this remains protected and sustainably managed.  Again, without proper management of the water, the Panama Canal would not function. 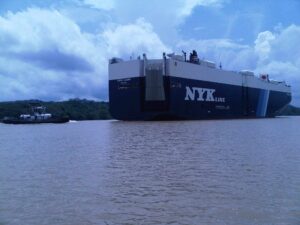 The third floor exhibit is The Panama Canal in Action. This floor has a few cool real-life sized replicas, but the best part I think was the simulator.  Warning:  I happened to time my visit with a large group of cruise passengers which was rather annoying as I had to fight for space, however once I found a small corner to squeeze into, it was a really cool exhibit.  It is set up so you are inside the operation room and you are the pilot of the ship through the canal.  The rate of which you cross the channel is dramatically sped up, so it is in my opinion the best way to experience it.  Consider the actual crossing of the canal averages between 8-10 hours…can you imagine a real-time simulator?  How boring!!!

Finally, the fourth floor exhibit is The Panama Canal in the World.  This exhibit highlights what an amazing impact the canal has had over the growth of not only the Canal Zone, but of the connection of the entire world.   Imagine the trip around the South America used to be an additional 8000 miles, talk about super shortcut!  All the commodities that we take for granted would not be so easily obtained had it not been for the construction of the Panama Canal.  And believe it or not, the canal still is not large enough to handle the volume of cargo and passenger ships making the crossing 365 days per year.   The Panama Canal expansion project is currently underway to make a 3rd lane of traffic that is wider and longer than the current locks systems increasing the payload from 4000 containers to 13,000 containers per ship.  It was due to open on its 100th birthday of August 15th, 2014 but is still not 100% complete.  Construction crews are working furiously on dredging the new passage and if you take a small boat to Monkey Island or Gatun Lake, you can see the works in action up close.

The final exhibit leaves you on one of the top decks so you can wave and cheer to the cruise ship passengers making their way through the locks and get some great photo ops of the Bridge of the Americas and the Gatun Locks further up the Panama Canal.    Down below on the ground level there is a Theater playing a great short movie to fill in some of the gaps of what you may not have taken the time to read in the museum.  I will be honest, I skipped it as I was running short on time, but from several people I spoke with they thought it was worth viewing.

All in all, I would recommend between 1-2 hours maximum at the museum, just depending on the crowds and how much time you spend on each exhibit.  I made it through in one hour and was comfortable that I had learned quite a bit and got my money’s worth.

If you really want to learn the entire history of the canal, I would suggest picking up a copy of “The Path Between The Seas” by David McCullough for your pre-vacation reading.

If you are coming to Panama and want to visit the Miraflores Locks, most of the city tours include that in their itinerary.  If you are short on time, you can skip the rest and just head straight to the locks on an express tour.