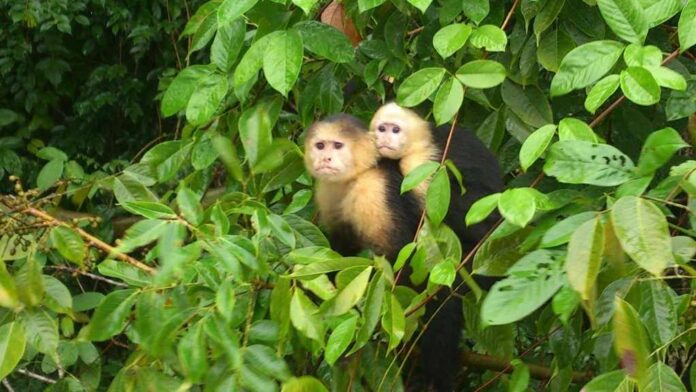 I actually did the combo tour with the Monkey Island and the Indian Village, but I will split this into two submissions for those looking for info on this specific activity.  I had been reading up on the tour and the area prior, not just from our operator, but from several customer reviews of the different activities from several different operators.  The overall satisfaction of the activities were high, however the experience differed between companies and clients.  So before I begin my personal experience, let me share a bit of background.

First part is Monkey Island…it is no longer an island, and it is no longer teaming with Monkeys.  What?  How can they call it that then?  Well these are areas that are only accessed by boat.  I liken this to all the beaches in the southern part of the bay in Puerto Vallarta, Mexico.  People still always call them islands even though we all know they are not….but it is not really hurting anyone as the point is to get to a place that is less visited due to the limited means of transportation.  They are still getting the same experience of less crowded beaches, beautiful tropical scenery, and a journey by boat to reach there.

That said, the experience on Monkey Island has in fact changed.  With the upcoming expansion of the Panama Canal, they are actively dredging areas of the ‘Culebra Cut’, the narrowest part of the canal to make way for the 3rd lane of locks.  As they dredge, they have given very little consideration for the environment and have just taken all the dirt from the bottom and piled it wherever they have space.  So, there was a great empty space between Monkey Island and the mainland and once they filled it up, the monkeys found freedom to expand into the rest of the region no longer needing to fight for territory or resources.  In other words, a lot fewer monkeys in a condensed area.  This has greatly reduced the amount of monkeys you could expect to see during your visit, however has not entirely eliminated it.  You will most likely see monkeys at monkey Island if you go with a good experienced guide and a captain with a keen eye.  And yes, it is worth visiting not just for the monkeys, the entire region is teaming with all sorts of wildlife so plenty of chances for great photo ops. 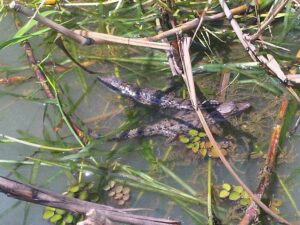 My personal experience of Monkey Island……wet and cold!!  I can never control my schedule, so I travel when I can….which does not always coincide with prime weather conditions.  Apparently, the month of November is the worst month for excursions in Panama as it is the month they receive the most rainfall.  More on that in another submission…..

Anyhow, we arrived to the Gamboa public dock after about an 50 minutes of driving outside the city.  We passed by parts of the Clayton ex-military base, saw both the Miraflores Locks and the San Pedro locks in the distance, and then drove into Sobernia National Park.   We constantly searched the trees overhead for wildlife, however the rainstorm was not helping that much. The guide interacted with us most of the time by pointing out places of interest, giving us some history and culture lessons, and some great personal experiences which broke the ice well and had us all laughing.

We loaded 8 of us into a very comfortable lancha (small outboard motor boat) that had a sun/rain cover and even cushions on the seats.  I sat up front with the guide who was kind enough to loan me a rain pancho, but secretly wished I was sitting in the back somewhere and not getting pelted by raindrops.  We headed out of lake and within just a short minute or two we were traveling alongside huge tankers making their way through the canal.   That right there was super humbling.  You feel so tiny compared to these huge beasts.

Within about 20 minutes, we came upon a first little island (not Monkey Island) where we spotted our first white-faced capuchin monkey.  This was the ONLY monkey living on this tiny little island.  The guide explained they nicknamed him ‘Grumpy’ because when the Canal Expansion began and they came on the island to try to relocate all the monkeys, he was the one who never allowed himself to be caught and preferred to live out his life alone….thus the grumpy old man.  We spent a few minutes up close to the shore and under the trees hanging overhead so “Grumpy” could come and receive a treat of bananas…..and we could all snap photos.  Suddenly I began to notice the rain less. 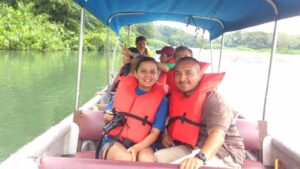 We continued along in search of crocodiles and turtles on the way to the Monkey Island, however since the water in the canal was much warmer than the cool air and rain, there were none to be found sunning themselves by the shores or resting on logs.  After about 20 more minutes we arrived out to the region of our destination, Monkey Island.  I say region because there were several formations on either side and we traversed through a sort of tunnel and cove.  Very peaceful and quiet and as luck would have it, the rain lightened and nearly stopped as we reached our destination.

We did encounter another family of white-faced monkeys almost immediately.  The male came down first but was very stingy and would not share with the female who was also carrying her baby.  After a bit of a struggle, we were able to get the momma monkey and her baby a banana treat of their own.  Incredible as the jumped right on the boat with us, I was able to get some fantastic photos….even for a cell phone.

Monkeys checked off the list, our guide began pointing out all the birds that were coming out after the rains were clearing.  First were the Osprey, which is one of my personal favorites.  We saw a toucan flying crossing the canal overhead, we encountered several parakeets and slightly larger green parrots.  We saw several of the Snail Kites & Calaculero which are normally abundant in this region however it was the first time I had encountered them in my travels.   The Snale Kites have very cool beaks adapted for eating snails who lay their eggs on the stalks of the vegetation that line the edge of the banks.  Finally we heard the infamous howler monkeys and were able to spot 3 off in the distance, but not close enough for my cell phone to get a good photo.

After about 40 minutes of winding through smaller channels slowly in search of wildlife, we headed back to the Canal.  Wow what luck to encounter an American Crocodile about the length of our boat traversing the canal ahead of us.  Again, a bit difficult to get a picture, but the guide did share his binoculars with us so we could take turns checking out the incredible size as it swam away to the other side.  For the first time that day I understood why I did not see anyone out doing kayak or SUP tours in the channels…….holy cats!! 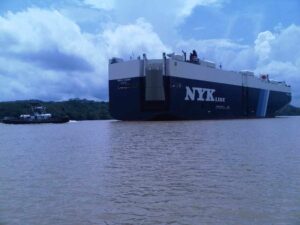 The way back we stepped it up a bit, as we were on the combo the idea was to stop at the Gamboa Resort and eat lunch before arriving to the Indian Village, however since it was Saturday and the kids were not at school in the morning, we skipped lunch and went straight there.  The guide explained that the food at Gamboa resort was not as good as and more expensive than the Golf Club at the Radisson hotel which was about a 15 minute drive from the dock, so we continued upstream to the village….more on that in the next submission.

All in all, this was a great experience.  Having travelled in the Cano Negro and Tortuguero channels in Costa Rica, I was expecting something a bit different, however what I did receive was a different than anything I had experienced.  Those places are unique, however they all require hours of commuting to reach and require at least a full day if not more of your time to reach and can be exhausting.  This is a gem found just 50 minutes outside of the city, and can be done in just a half day.  My overall opinion is that this is definitely a must do if you want to get out of the city, see some nature, take some great shots of wildlife, and are on a limited schedule.  For a complete day of nature and culture, the combo is perfect.